As part of the celebration of the re-opening of the Explorers wing of the museum we have a small display of student work on show.  This work was made by a group of young people in Year 10 at Whitby Community College. 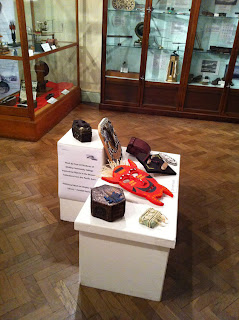 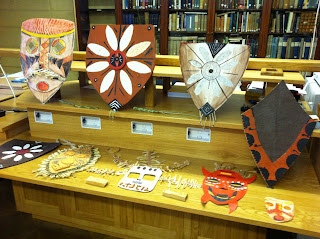 It has been inspired by some of the objects from the Pacific that we have on display. These beautiful masks and shields were on temporary display in library yesterday together with many sketches and drawings.  I will add some pictures of the sketches and drawings to the blog later.
The pieces on the plinths (the first picture) will remain on display for a couple of weeks in the Explorers wing of the museum.
Posted by Lynne Glazzard at 03:23 No comments:

Today was the grand re-opening of the Explorers wing in the museum. Dr Sophie Forgan, Director of the Captain Cook Museum gave a short talk about the lives of objects. She used a small piece of Kauri gum as an illustration of the different journeys and stories that a modest object can tell.

The refurbishment has been a brilliant team effort and it was lovely to have so many people together this afternoon to share and celebrate our achievements.

- Posted using BlogPress from my iPhone

Posted by Lynne Glazzard at 12:29 No comments:

Re-opening of the Explorers wing

It has been a busy few weeks for the team of volunteers at Whitby Museum.  As one of the group of museums involved in a project called 'Precious Cargo' we have been working to make some of our objects from different world cultures more accessible to the visitors.

Some of the objects have now been displayed in new cases and others have been moved so that they are more easily seen.  This brightly coloured object is a bird shaped rattle from the Nootka Sound region of the North Americas. 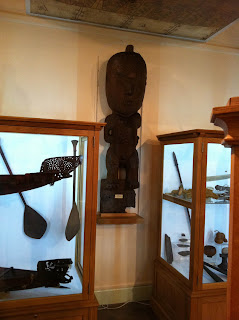 The wonderful Maori Tiki has been raised up into position between the two new cabinets alongside the Waka Taua (Maori War Canoe models).  Tomorrow is the official re-opening and I must thank all the enthusiastic team of volunteers who have given their time to this including in particular Fiona Barnard, Holly Hyams, Rebekah Parkinson and Joan Edwards  Without the time and energy given by the volunteers none of this would be possible so well done to the whole team!  There is still plenty to get our teeth into though and we are planning a number of related events as well as working on refining the displays over the coming months.
Posted by Lynne Glazzard at 12:50 No comments:

Stories of the World

Our project at Whitby Museum is really beginning to take shape.  The two new cabinets are in place and we have begun to assemble the new display in one of the original cabinets.  All this extra space means that we are able to show objects that have been in storage for some time. 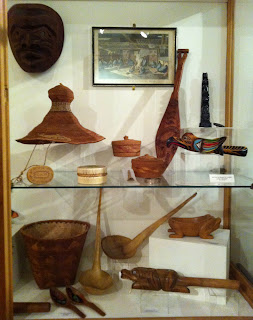 Here are some of the objects from Nootka Sound.  They include some wonderful examples are basketry including the hat (top left) that has patterns woven into the brim one of which is a striking Whale motif.    The basket (bottom left) is made of birch bark and the two large ladles from sheep horn.  There is still quite a bit of work to do including making some labels for these objects so that visitors can tell what they are.  Nootka Sound was one of the places visited by Captain James Cook, although these objects date from much later. 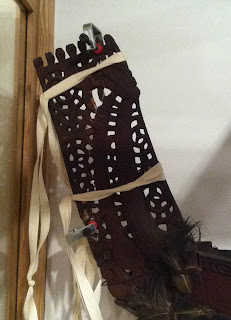 Work is still going on in other areas of the display including  more work on one of the model Maori War Canoes.  Here you can see Rebekah has re-attached a piece that had been broken off some years ago.  She has been working very carefully and, as is usual in a museum situation, everything has to be reversible at a later date if better methods become available.  It is fascinating to watch someone so skilful at work!
Posted by Lynne Glazzard at 12:14 No comments:

More work on the displays 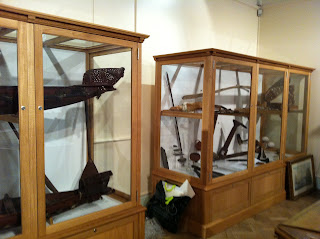 The new cabinets are in place and we have begun work on the re-display of the objects as part of our Precious Cargo and Stories of the World project.  These two new cabinets house two large model Maori War Canoes (left hand cabinet) and objects including some intricately carved ceremonial adzes.
Posted by Lynne Glazzard at 14:33 No comments:

Today I haven't got quite as much done as I had hoped but I have unpacked these carved wooden spatulas and put them back on display. They are from the region of Papua New Guinea and are beautiful examples of carved work. So many of the objects in this part of the museum include really expressive faces as part of the decoration.

Posted by Lynne Glazzard at 10:55 No comments: 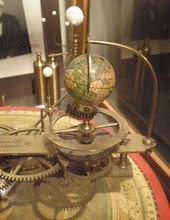